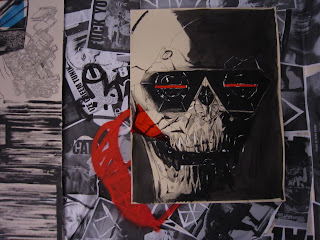 Avengers piece for the A shop called quest show 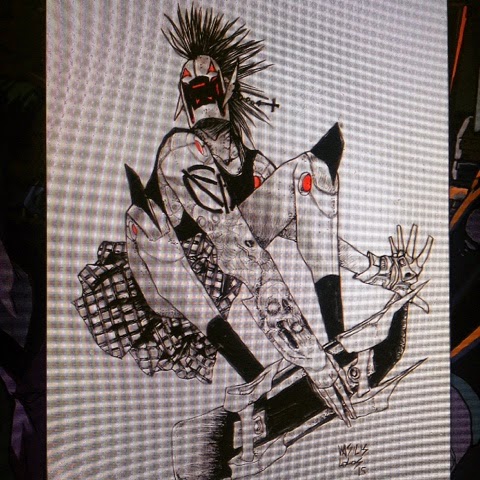 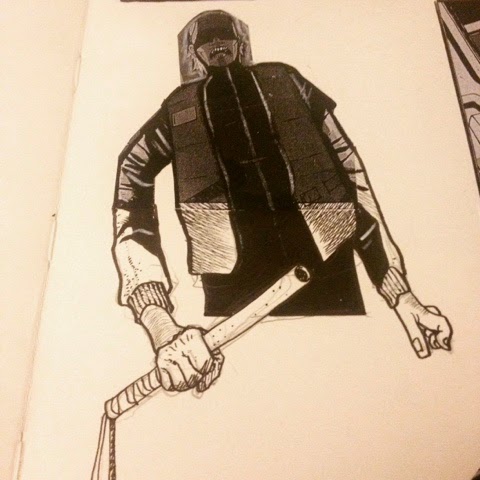 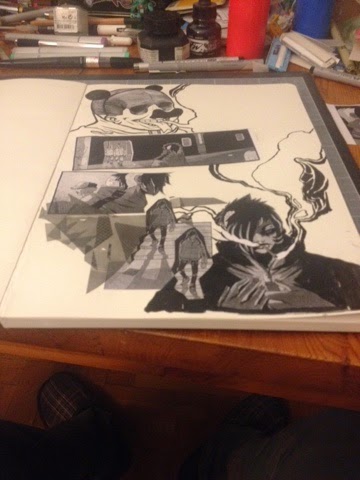 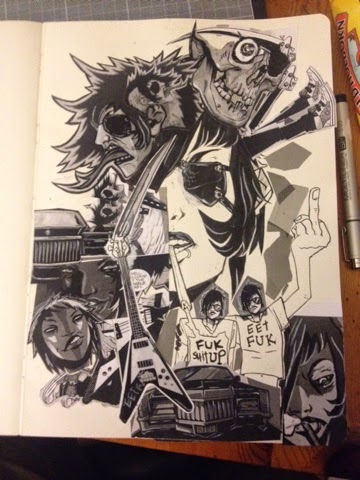 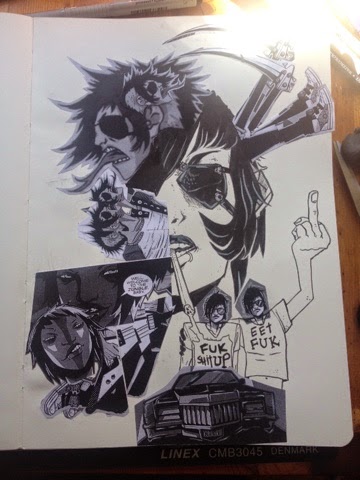 It was ten years ago that i did the book . No i take it page per page and i am remakin a new book using the art from 2005 these are some of the cover-proccess pages lets see what happens!! 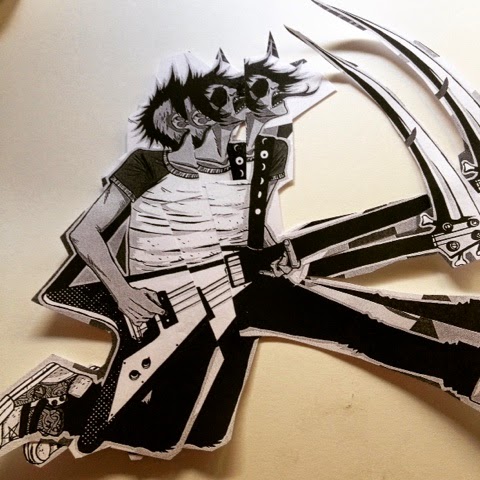 Labels: The pirates of Coney Island 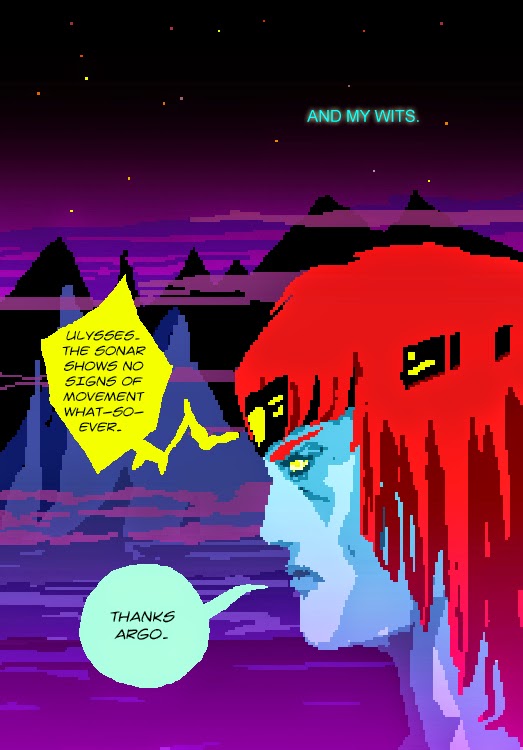 I usually don't deal with webcomics, hell i rarely see any worth scrolling. BUT they IS some art on the internet that IS worth looking at and reading.  But most of art/books/comics are like that.
I decided to take a serious stab on a web comic series, the only story that I feel close enough to me to do it and just keep on keeping at it is my version on Ulysses trials. And I say trials because they were not "voyages". The guy turned his back on the Gods and they  gave him the bitch treatment by separeted him from his wife, from his son, and from his god-damn dog.  What a bunch of assholes.
Long story short, this is me raising the cup to , the original "lucifer-fuck-you-I-will-not-submit" character.
The most ancient punk guy. My Dude Ulysses
Go to : ODYSSEIA3000.COM 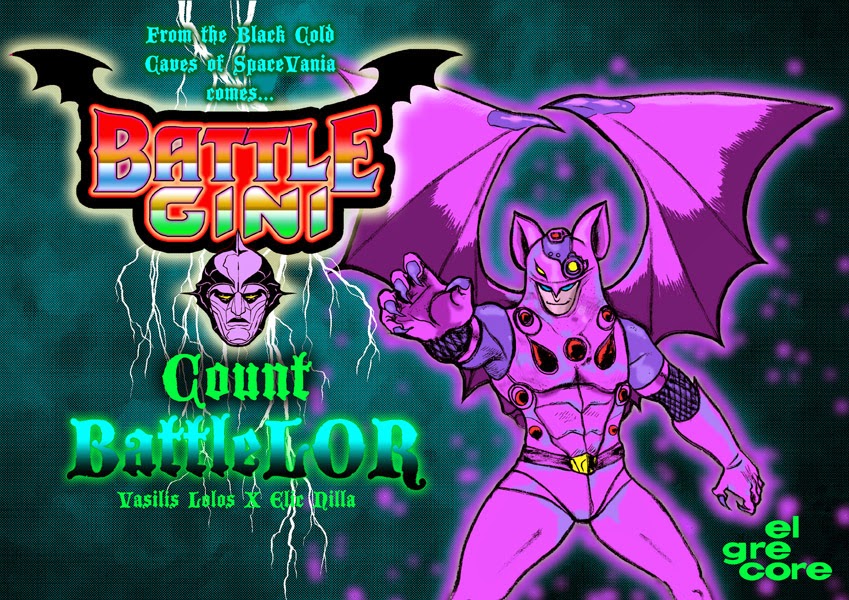 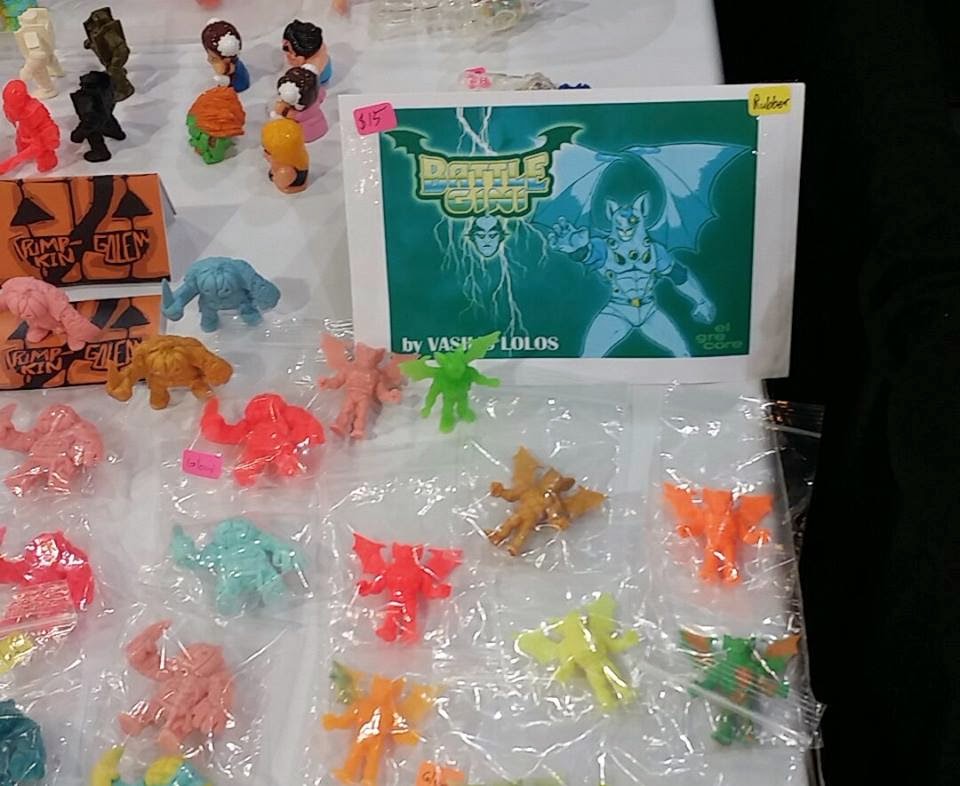 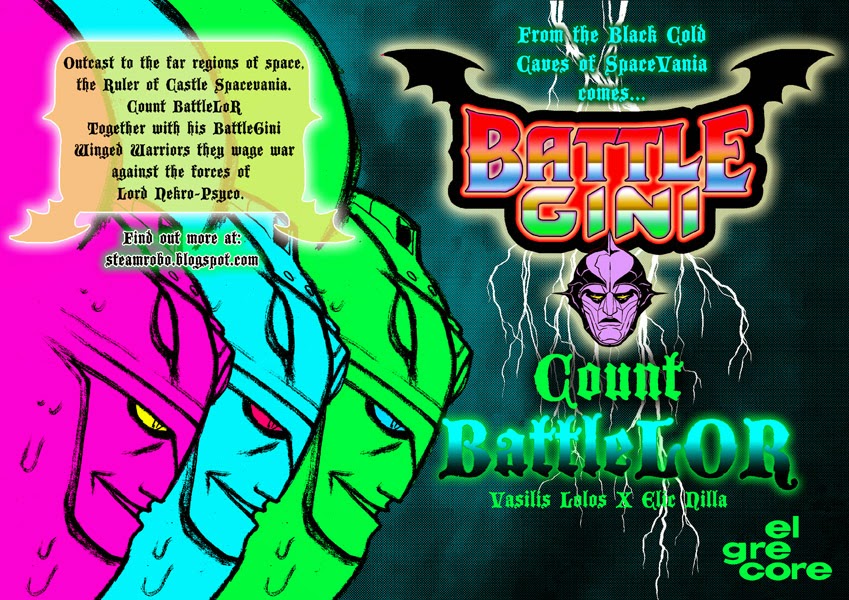 From the distant , exotic lowlife land of greece comes.. BATTLEGINI 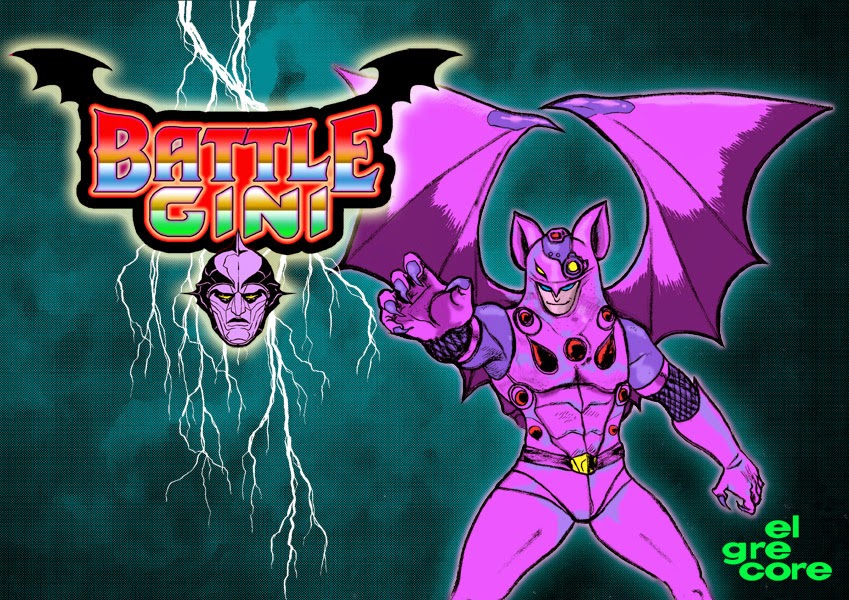 As far as I can remember , one of my dreams was to make my own toys and figures.. Now we got the internet, people get together , one way or another" I met up with this guy Eric Nilla on a forum, Eric makes toys and figures, it opended up my eyes and showed me that this is doable, living back in athens greece even if it is the capital, art is something you have to strive for. there are no decent supplies anywhere, so (insert internet again) Eric guided me through the what-to-do if you ever want to make figures. So here i am now, teaming up with my toy mentor and thanks to him I have my first attempt to something awesome complete, i will unveil it soon and let me tell you , i hane NO intention stopping, i already have tons of figures in the making and all because this Nilla dude made a sweet skeletor muscle fig that blew my mind with its simplicity and its awesomeness that my friend is PUNK ROCK , simple and effective as punch in the teeth.
I GIVE YOU MY SERIES , BATTLEGINI , my homage to greek battle beasts and exogini . My first kid, frankensteined in athens greece and molded in california, 2 dudes getting together making art. That's the life my dude. This is a photo of the first one Eric molded of my timid first sculpt and a title card i am working on to hit up Designer Con.
Thankx again Nilla 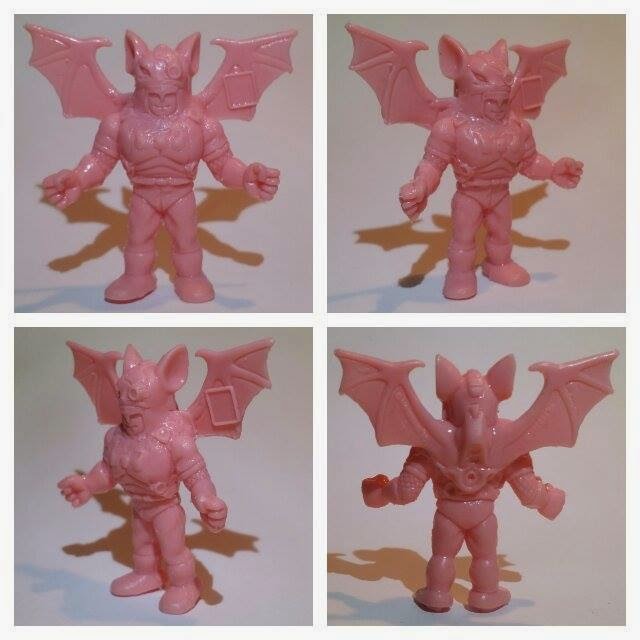 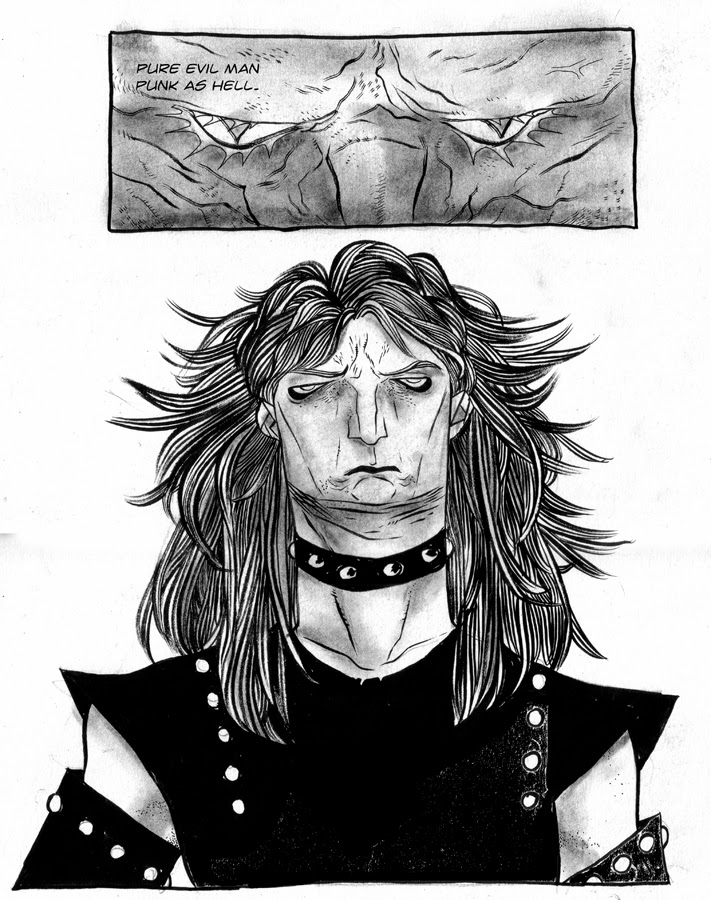 http://www.terrorizer.com/dominion/ater-liber/morbid-tales-illustrated-tribute-celtic-frost-now-available/  I got a story in this it is pretty damn awesome.
Posted by v at 2:12 PM 2 comments: 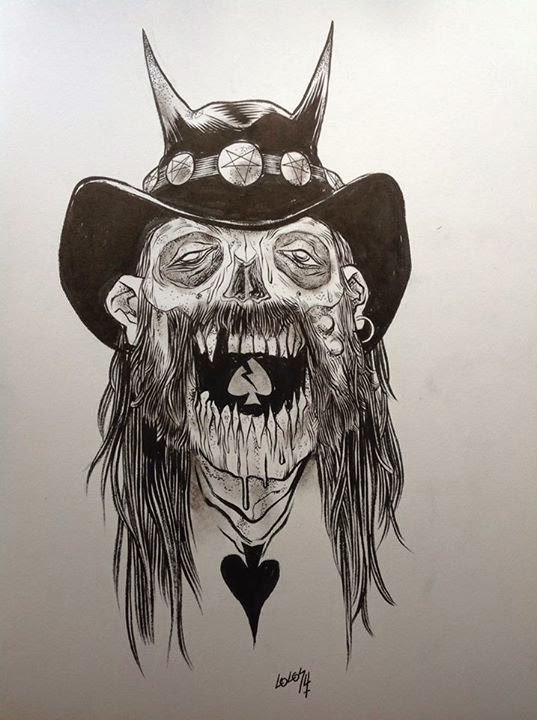 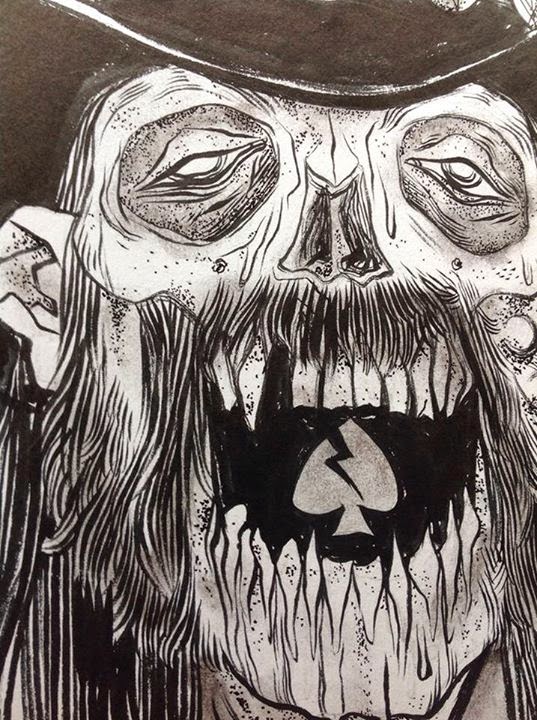